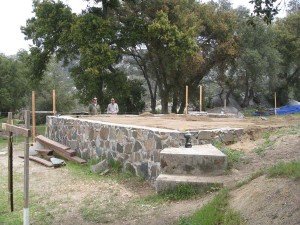 We started with a beautiful, old stonewall footing from a previous building. Though pretty, it was neither level nor straight so we used flexible forms to create a slab that followed the existing line. Because of the existing stonewall, we poured an inner footing and set the posts to the inside of the wall, allowing for good attachment to the slab.

Setting the posts to the inside required redesigned the framing system that supports the doors and windows, called the bucks. We came up with a system with interchangeable sides (no specifics lefts or rights) which could be production framed. These bucks allow us to round the edges of the windows on the interior and the exterior. The windows can be set in enough to achieve the classic ‘straw bale look’ without creating the difficult flashing requirements of deeply set windows.

We used pre-manufactured trusses which could be lifted by four people. Once the roof was sheeted and dried in, we took delivery of the bales. The squeeze unloaded the bales from the truck but was too wide to put the bales into the house so we all got a good workout moving 200 bales by hand. 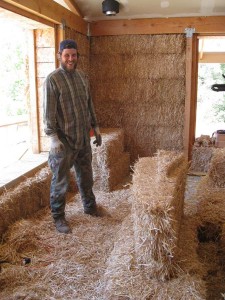 The simple, well-designed framing made installing the bales a joy. The easy part (everything up to the gable ends) went very quickly. The gable ends are always trickier, requiring “cheese wedges” to fill the triangular shapes.

Next came the windows. Window openings are the most vulnerable part of any wall system, including straw bale, and must be flashed and detailed carefully. We flashed the windows so any water that might get behind the window will be daylighted out under the sill. We used Trex for window sills, cutting a drip edge into each one.

To get the bales 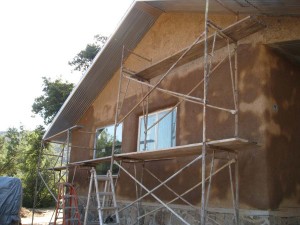 fireproof as soon as possible, we sprayed the exterior walls with slip (a mixture of clay and water). This also acts as a glue for the first layer of clay plaster. Before the plaster, we install a welded wire mesh which will become embedded in the plaster to help provide shear and out-of-plane strength. In general, we try to reduce the amount of metal wire/lath used in straw bale buildings but this building required extra shear reinforcement. 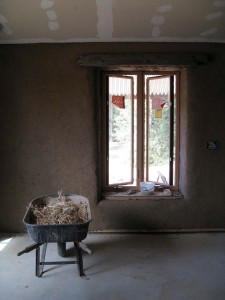 The large overhangs protect the walls, making clay plaster a good choice. The building site had deposits of beautiful red clay that unfortunately proved difficult to dig and process for plaster. So we used clay purchased from the Lake Elsinore region and tested recipes until we got a mix we liked. We prefilled the low spots and the gable ends and then hand-applied the first coat to the exterior. Once dry, we troweled on the second coat and, soon after, a thin third coat.

We applied a first coat on the interior, integrating some salvaged wood lintels and a truth window.

Stay tuned for pictures of the interior finishes…