Our mission is to create high-performance natural homes from local, carbon-sequestering materials; to preserve the environment by reducing embodied-carbon; and to educate about, advocate for, and provide healthy, high-quality shelter for as many people as possible. 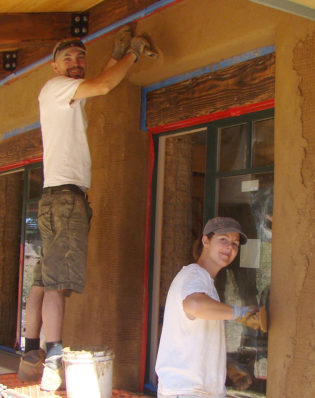 We are an award-winning design-build company specializing in high-performance natural homes, particularly strawbale buildings with natural plasters. We design and build comfortable, unique, quiet, healthy, beautiful, energy-efficient buildings that are better for people and the environment. We also help homeowners integrate the beauty and benefits of clay plasters into their existing buildings.

Simple Construct is a small, flexible design-build general contracting company offering many services. We can design, draft, permit, and build your project from foundation to roof. We offer strawbale and natural plaster subcontracting services, and we teach workshops and lead work parties. We also install beautiful, healthy clay plaster in conventional homes. We can help to turn your good ideas and intentions into reality.

We are dedicated to simplicity, directness, and honesty — in design, materials, techniques, and ambitions. We seek people who have a similar vision: the not-so-big house, the simplest way to achieve energy efficiency, the healthiest materials, and the most direct way to get the project done. 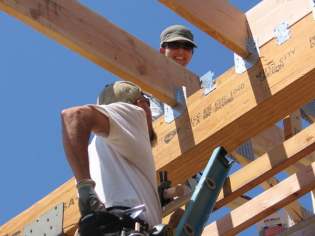 Simple Construct is a partnership between Rebecca Tasker and Mike Long, who met in art school in Brighton, England and have been working together, in one way or another, for over 20 years. Our backgrounds in art (sculpture, printmaking, and installation art) led us to careers in art management in Boston, MA. Mike ran a large art supply store and Rebecca ran a non-profit contemporary art gallery. After being too cold for six years, we moved to San Diego, CA. The move created an opportunity to redirect our careers back toward the hands-on making of things.

For Rebecca, this led to an entry-level job in construction, helping to build a spec home in Mission Bay. After too many trips to the landfill, Rebecca began to research more sustainable ways to build and found strawbale building. With the opportunities provided by Alan Schmidt of Distinctive Builders, Rebecca began building with bales. When Mike saw how much fun she was having, he decided to join her. Building with bales led them to learn about natural plasters, which they became passionate about. 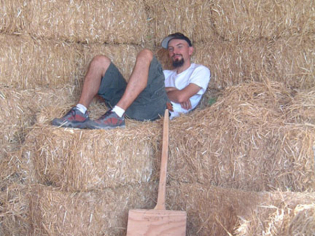 Through attending international, national, and local conferences and workshops and becoming more involved with the growing strawbale community in San Diego, we have expanded our knowledge of strawbale building and natural plasters. In 2007, to help us define and articulate our goals as strawbale and natural plaster professionals, we formed Simple Construct. In 2010, we earned a general contractors’ license, which allowed us to further expand our services. In 2011, Rebecca joined the Advisory Board of the California Straw Building Association (CASBA) and took over as editor of their Journal. In 2013, Rebecca earned the Building Performance Institute‘s Building Analyst and Envelope Professional certifications in building science. In 2017, CASBA awarded Simple Construct the “Traveling Straw Dog Award” in recognition of the furthering of straw building in California. In 2018, a home that we designed and built was the first residence in Southern California to receive Net Zero Energy Building certification through the Living Building Challenge. Our project is one of only two in Southern California and 27 in the world, and has the distinction of being the last building to be included in the NZEB program before it was changed to “Zero Energy” (ZE), a streamlined version of the certification aimed at recognizing zero energy use buildings more quickly and easily.

You may have noticed that our license number changed in June of 2019. That’s because Simple Construct became a Benefit Corporation. We restructured our business to reflect and embed our values. As a Benefit Corporation, although we are a for-profit company, maximizing profits is not our only consideration. We have written into our articles of incorporation that:

We are an award-winning Design-Build firm specializing in high-performance natural homes with a focus on carbon-positive green building practices, strawbale building, energy efficiency, natural finishes, clay & lime plaster, and sustainable materials for new & existing homes in San Diego County, CA. We are experts in using natural materials to achieve comfort and high-performance. We offer a range of services… Read more

what clients say about us

what’s in a name?

sim·ple (sem’pel) adj. 1. Easy to understand, deal with, use, etc.: a simple matter; simple tools. 2. Not elaborate or artificial: a simple style. 3. Unaffected; unassuming; modest: a simple manner. 4. Free of deceit or guile; sincere; unconditional: a frank, simple answer. 5. Not grand or sophisticated; unpretentious: a simple way of life.

con·struct (kon’strkt) noun 1. An image, idea, or theory, especially a complex one formed from a number of simpler elements. 2. Something constructed.

As of June 2019, Simple Construct is a Benefit Corporation.

We restructured our business to reflect and embed our values. As a Benefit Corporation, although we are a for-profit company, maximizing profits is not our only consideration. We have written into our articles of incorporation that:

We hope you share our vision for a way of building that not only does less harm, but can actively do good for the environment and human health.